-opening of the book : description of the tree-enormous, dark, foreboding

“The beach shed its deadness and became a spectral gray white. Then more white, then gray, and finally it was totally white and stainless, as pure as the shores of Eden. Phineas still asleep on his dune, made me think of Lazarus, brought back to life by the touch of God”

Phineas as a Christ figure

pg 105 ” I lost part of myself to him, then a soaring sense of freedom revealed that this must have been my purpose from the first — to become a part of Phineas”

“I believe you it’s okay”

-Finny breaks the swimming record but doesn’t want to show anyone — like Jesus’ miracles, Jesus’ humility

-“Phineas had been sitting, motionless, leaning slightly forward –not far from the position in which we prayed at Devon”

-resurrection= when Finny comes back to school after his first fall? –Carnaval?

Passages: the following passage might prove to be important. Re-read the sections with these passages and think about why they might be significant? What do they mean? What are important ideas, imagery, or words? How do they add to the story or a theme? Do they incorporate any literary devices?

While the group of boys lament over not having Leper in the assembly room to testify, Gene says, No one said anything. Phineas had been sitting motionless, leaning slightly forward, not far from the position in which we prayed at Devon. After a long time he turned and reluctantly looked at me. I did not return his look or move or speak. Then at last Finny straightened from this prayerful position slowly, as though it was painful for him. “Leper’s here,” he said in a voice so quiet, and with such quiet unconscious dignity, that he was suddenly terrifyingly strange to me.

Passages: the following passage might prove to be important. Re-read the sections with these passages and think about why they might be significant? What do they mean? What are important ideas, imagery, or words? How do they add to the story or a theme? Do they incorporate any literary devices?

As Gene sees the trucks coming to Devon, he says, “I thought the Jeeps looked noticeably uncomfortable from all the power they were not being allowed to use. There is no stage you comprehend better than the one you have just left, and as I watched the Jeeps almost asserting a wish to bounce up the side of Mount Washington at eighty miles an hour instead of rolling along this dull street, they reminded me, in a comical and a poignant way, of adolescents.”

“[I]t seemed clear that wars were not made by generations and their special stupidities, but that wars were made instead by something ignorant in the human heart.” 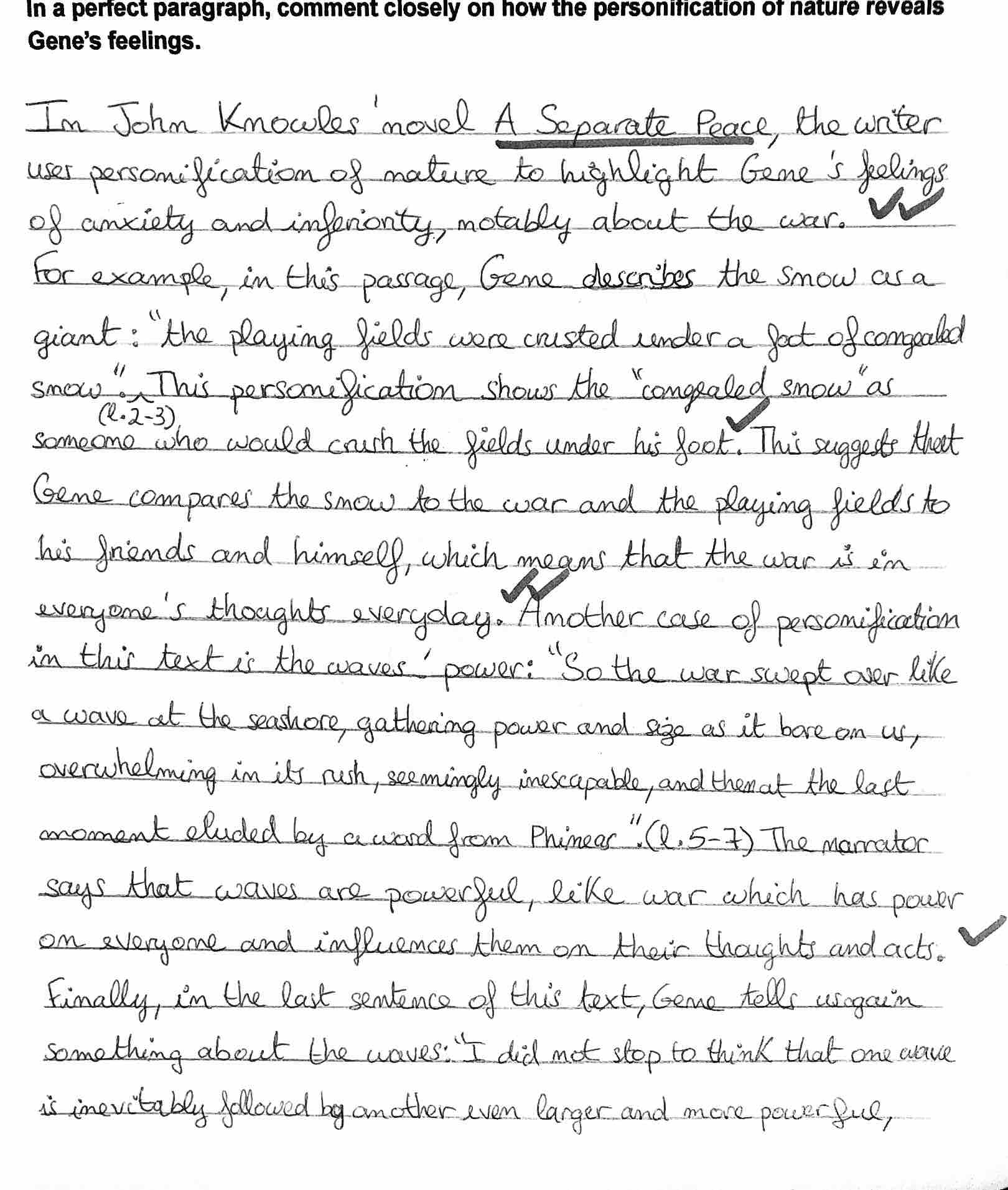 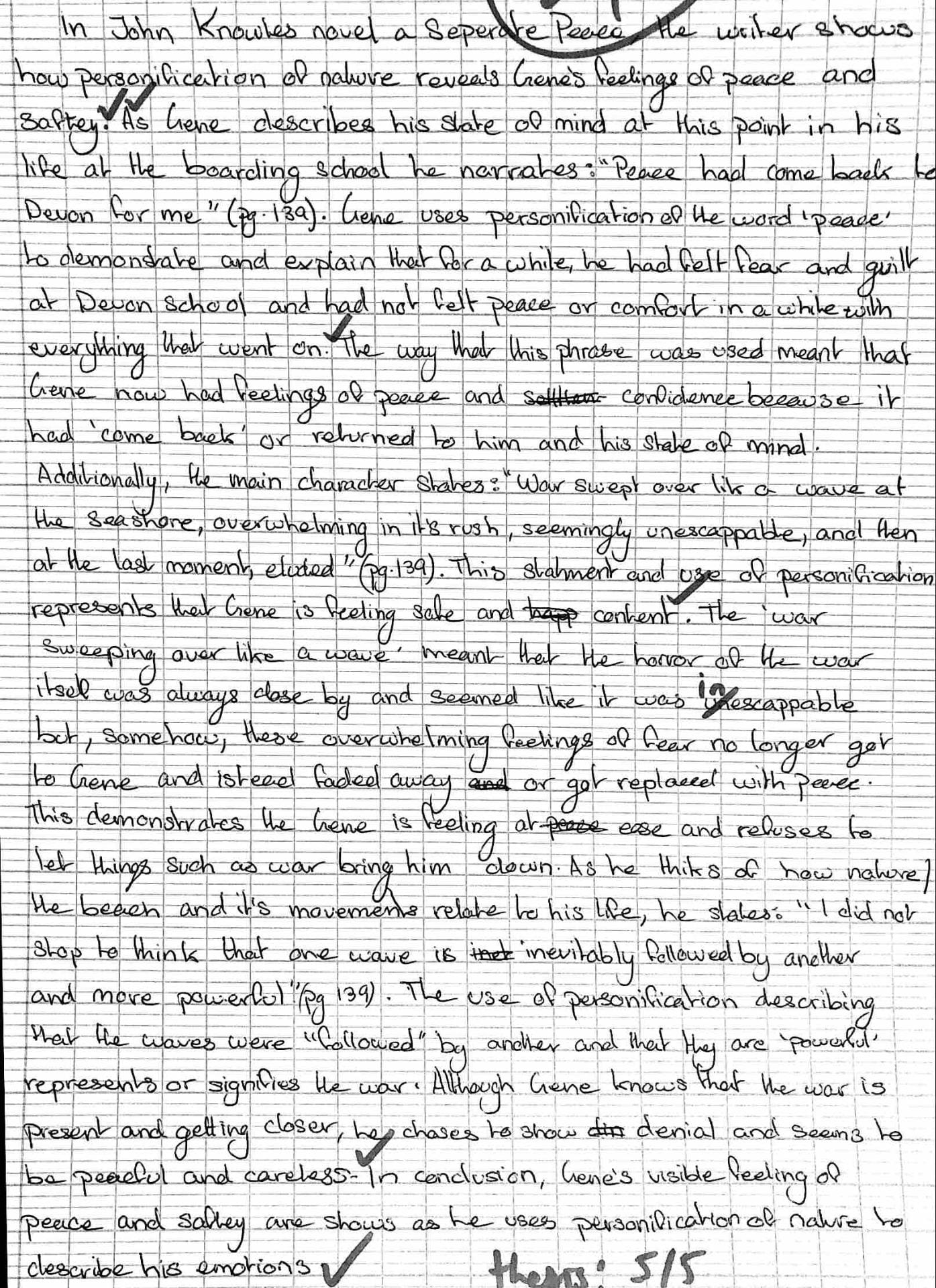 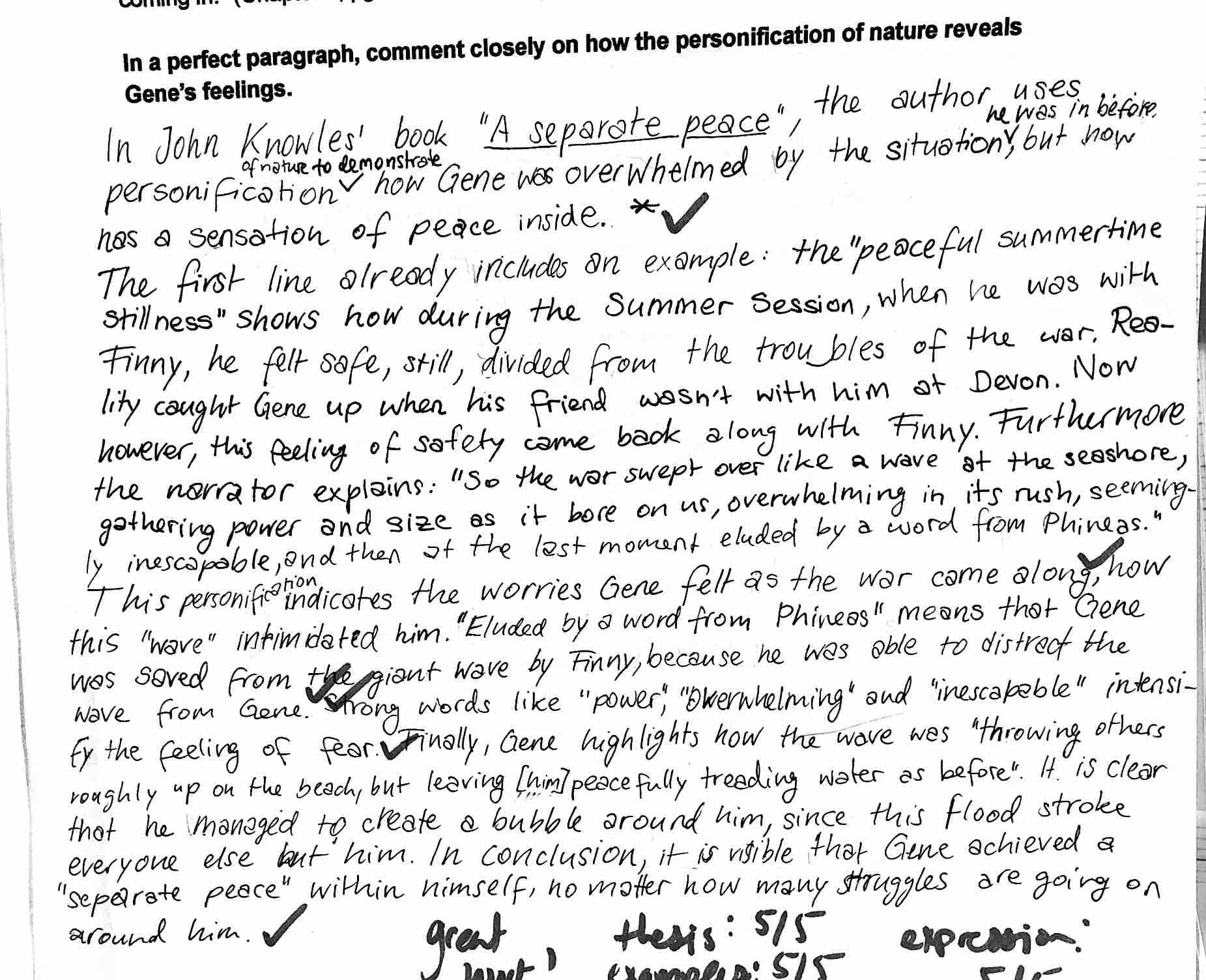 The following passages might prove to be important. Re-read the sections with these passages and think about why they might be significant? What do they mean? What are important ideas, imagery, or words? How do they add to the story or a theme? Do they incorporate any literary devices?

“They laughed at him a little, and he squirmed and looked guiltier than ever. He had a very weak foothold among the Butt Room crowd, and I had pretty well pushed him off it. His glance flickered out at me from his defeat, and I saw to my surprise that I had, by making a little fun of him, brought upon myself his unmixed hatred. For my escape this was a price I was willing to pay.”

“Not long afterward, early even for New Hampshire, snow came. It came theatrically, late one afternoon; I looked up from my desk and saw that suddenly there were big flakes twirling down into the quadrangle, settling on the carefully pruned shrubbery bordering the crosswalks, the three elms still holding many of their leaves, the still-green lawns. They gathered there thicker by the minute, like noiseless invaders conquering because they took possession so gently. I watched them whirl past my window—don’t take this seriously, the playful way they fell seemed to imply, this little show, this harmless trick.”

“Not that it would be a good life. The war would be deadly all right. But I was used to finding something deadly in things that attracted me; there was always something deadly lurking in anything I wanted, anything I loved. And if it wasn’t there, as for example with Phineas, then I put it there myself. But in the war, there was no question about it at all; it was there.”

“[P]eace had come back to Devon for me. So the war swept over like a wave at the seashore, gathering power and size as it bore on us, overwhelming in its rush, seemingly inescapable, and then at the last moment eluded by a word from Phineas; I had simply ducked, that was all, and the wave’s concentrated power had hurtled harmlessly overhead, no doubt throwing others roughly up on the beach, but leaving me peaceably treading water as before. I did not stop to think that one wave is inevitably followed by another even larger and more powerful, when the tide is coming in.”

“I did not know everything there was to know about myself, and knew that I did not know it; I wondered in the silences between jokes about Leper whether the still hidden parts of myself might contain the Sad Sack, the outcast, or the coward.” 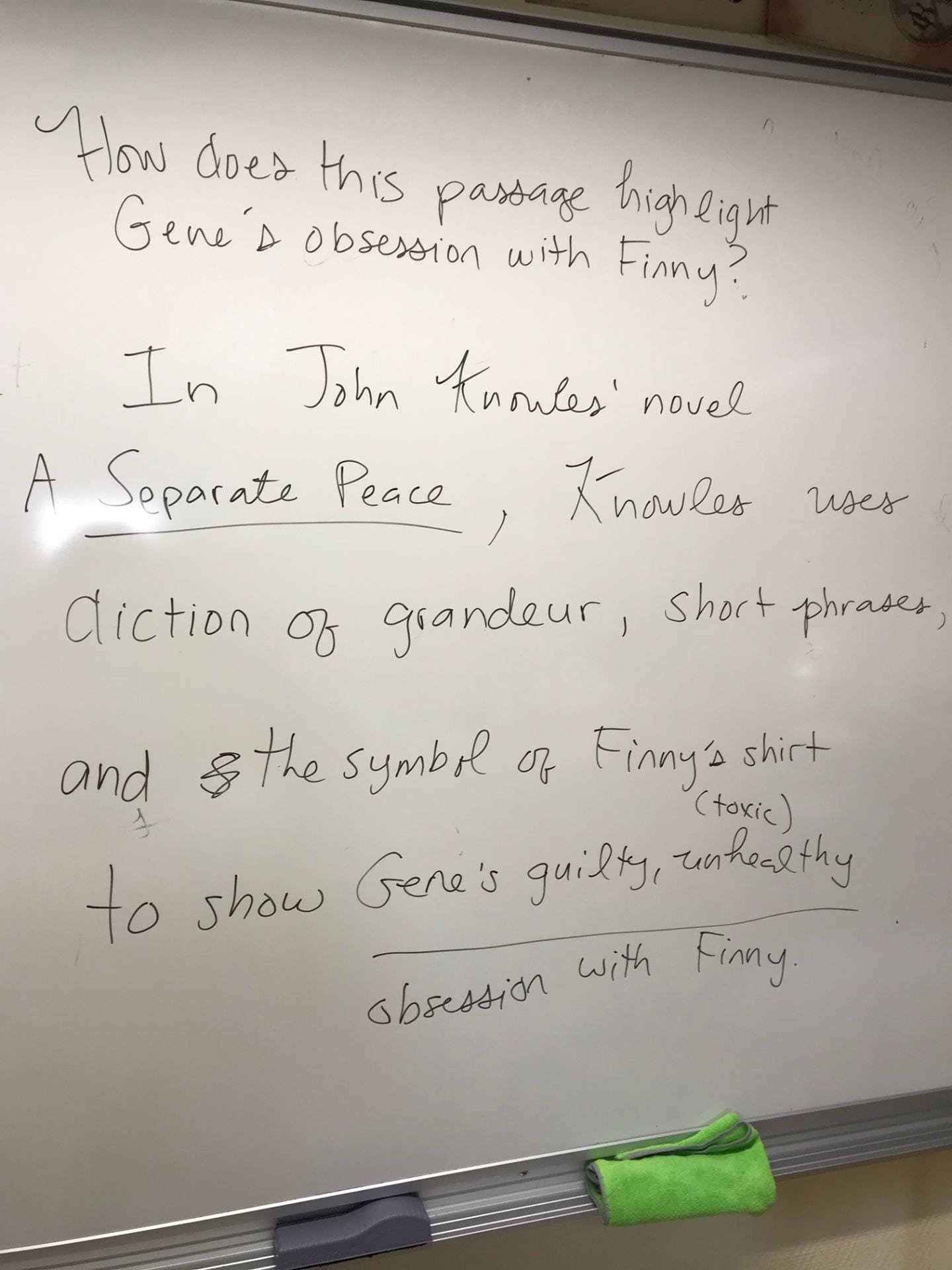 In John Knowles’ novel A SEPARATE PEACE, Knowles uses the symbol of Finny’s shirt and diction of grandeur to show Gene’s guilty, toxic obsession with Finny. For example, when Gene found himself in their room alone after Finny’s accident, he has an idea to wear Finny’s clothes and searches for his pink shirt: “I looked for and finally found his pink shirt.” This item of clothing is much more than a shirt to Gene. It symbolizes the night when Gene first felt jealous of Finny, because he could “get away with anything.” By putting on the shirt, Gene becomes Phineas : “I was Phineas, Phineas to the life. I even had his humurous expression in my face, his sharp, optimistic awareness.” Here, more than imitate Finny, by putting on his clothes Gene clearly hopes to “become” his roommate. This is demonstrated when he repeats “Phineas” and also in the fact that he wants not just to look like Finny, but also to adopt his “sharp, optimistic” outlook that allows him to get away with things at school. The shirt signifies everything Gene wishes to be and envies Finny for. Furthermore, in the same passage the narrator describes the effect Finny’s clothes have on him. He uses words such as “rich,” “noble,” “high,” “Spanish grandee,” “aristocrat,” and “triumphant” to express his feeling of intoxicating “grandeur” in response to taking on the role of Finny. The fact that these words are so hyperbolic shows the intense desire, admiration, and perhaps even his grief he has for Finny. Conceivably, these emotions indiciate that he is devoted to replacing Finny—in other words, to soothe his guilt by living out the life that he took away from him. All in all, Gene’s narration in this extract reveals his unhealthy obsession with Finny, and the power his guilt has over him.

Evidence it was by accident:

“I reached out but you were gone. You went down through those little branches underneath and when I reached out there was only air.” chapter 5

“what happened there at the tree, that goddamn tree, I’m going to cut down that tree, who cares who can jump out of it”

“He had never been jealous of me for a second. Now I knew that there never was and never could have been any rivalry between us”

“I deliberately jounced the limb so you would fall off”

“If anyone had been suspicious of me I might have developed some strength to defend myself but there was nothing, no one suspected”

“I did not cry then or ever about Finny”

“he must be too sick or too noble to tell them”

“trying to empty my mind…to forget who I was”

“I cried because of kindness which I had not expected”

“Finny his balance gone swung his head around to look at me for an instant with extreme interest, and then he tumbled sideways”

In Knowles’ novel A Separate Peace, the writer uses repetition to show Gene’s fear of the past. For example, when Gene first arrives as an adult at Devon School, he looks back on his memories and narrates: “I felt fear’s echo” (p. 2).At this moment, as Gene reminisces, he constantly uses the word “fear”. Moreover, the fact that fear has an “echo” shows that his past continuously haunts him. Additionally, just a paragraph later, Gene observes: “looking back now…I could see with great clarity the fear I had lived in” (P.2). The dominant emotion in Gene’s mind is clearly fear. Here, repetition serves to reveal Gene’s deep-seated anxiety connected to his past. Another striking example occurs when Gene is walking through his school’s halls and contemplates: “preserved along with it like stale air in an unopened room, was the well-known fear which had surrounded and filled those days, so much of it that I hadn’t even known it was there” (p.2).  The “well-known” fear that Gene refers to could reference the war, as well as his guilt surrounding his relationship with his friend Finny. The fear here is so intense, that Gene compares it to an omnipresent force such as the air. This mounting apprehension of his high-school memories is once again reinforced by the repetition of the word “fear” which clearly establishes the narrator’s discomfort. Finally, Gene highlights: “there were a couple of places now which I wanted to see both were fearful sites and that’s why I wanted to see them”.  This quote once again underlines Gene’s shame connected to his younger self, and the environment which reminds him of his sins. To sum it up, the repeating refrain of “fear” (used 5 times on the first page of the novel) intensifies the reader’s experience of Gene’s trauma.

To what extent should we consider Gene to be an unreliable narrator? How does this concern affect our understanding of the story that he tells and our attitude toward him?